Crossref is hiring an R&D Developer in Oxford

We are looking to hire an R&D Developer in our Oxford offices. We are look for somebody who: Is passionate about creating tools for online scholarly communication. Relishes working with metadata. Has experience delivering web-based applications using agile methodologies. Wants to learn new skills and work with a variety of programming languages. Enjoys working with a small, geographically dispersed team. Groks mixed-content model XML. Groks RDF. Groks REST. Has explored MapReduce-based database systems.

Allen Renear and Carole Palmer have just published an article titled “Strategic Reading, Ontologies, and the Future of Scientific Publishing” in the current issue of Science (http://0-dx.doi.org.libus.csd.mu.edu/10.1126/science.1157784). I’m particularly happy to see this paper published because I actually got to witness the genesis of these ideas in my living room back in 2006. Since then, Allen and Carole’s ideas have profoundly influenced my thinking on the application of technology to scholarly communication.

In an earlier post I talked about using the PAM (PRISM Aggregator Message) schema for an SRU result set. I have also noted in another post that a Search Web Service could support both SRU and OpenSearch interfaces. This does then beg the question of what a corresponding OpenSearch result set might look like for such a record. Based on the OpenSearch spec and also on a new Atom extension for SRU, I have contrived to show how a PAM record might be returned in a coomon OpenSearch format.

As posted here on the SRU Implementors list, the OASIS Search Web Services Technical Committee has announced the release of drafts of SRU and CQL version 2.0: sru-2-0-draft.doc cql-2-0-draft.doc The Committee is soliciting feedback on these two documents. Comments should be posted to the SRU list by August 13.

A new version of our OpenURL resolver was deployed July 2 which should handle higher traffic (e.g. we have re-enable the LibX plug-in ) Unfortunately there were a few hick ups with the new version which I believe are now corrected (a character encoding bug and a XML structure translation problem). Sorry for any inconvenience.

There’s a new XMP Primer (PDF) by Ron Roskiewicz (ed. Dianne Kennedy) available from XMP-Open. This is copyrighted 2008 but I only just saw this now. This is a 43 page document which provides a very gentle introduction to metadata and labelling of media and then introduces XMP into the content lifecycle and talks to the business case for using XMP. The primer covers the following areas: Introduction to Metadata Introduction to XMP XMP and the Content Lifecycle XMP in Action; Use Cases Additional XMP Resources One small gripe would be that this seems to have been prepared for US letter-sized pages and although is printable on A4 there is the slightest of clippings on the right-hand margin with no real loss of information but it does confer a sense of “incompleteness”.

[Update - 2009.06.07: As pointed out by Todd Carpenter of NISO (see comments below) the phrase “SRU by contrast is an initiative to update Z39.50 for the Web” is inaccurate. I should have said “By contrast SRU is an initiative recognized by ZING (Z39.50 International Next Generation) to bring Z39.50 functionality into the mainstream Web“.]

[Update - 2009.06.08: Bizarrely I find in mentioning query languages below that I omitted to mention SQL. I don’t know what that means. Probably just that there’s no Web-based API. And that again it’s tied to a particular technology - RDBMS.] 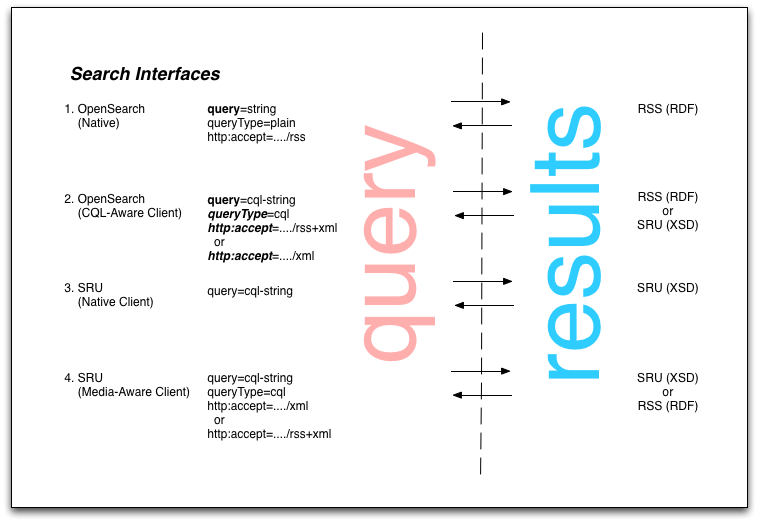 There are two well-known public search APIs for generic Web-based search: OpenSearch and SRU. (Note that the key term here is “generic”, so neither Solr/Lucene nor XQuery really qualify for that slot. Also, I am concentrating here on “classic” query languages rather than on semantic query languages such as SPARQL.)

OpenSearch was created by Amazon’s A9.com and is a cheap and cheerful means to interface to a search service by declaring a template URL and returning a structured XML format. It therefore allows for structured result sets while placing no constraints on the query string. As outlined in my earlier post Search Web Service, there is support for search operation control parameters (pagination, encoding, etc.), but no inroads are made into the query string itself which is regarded as opaque.

SRU by contrast is an initiative to update Z39.50 for the Web and is firmly focussed on structured queries and responses. Specifically a query can be expressed in the high-level query language CQL which is independent of any underlying implementation. Result records are returned using any declared W3C XML Schema format and are transported within a defined XML wrapper format for SRU. (Note that the SRU 2.0 draft provides support for arbitrary result formats based on media type.)

One can summarize the respective OpenSearch and SRU functionalities as in this table:

What I wanted to discuss here was the OpenSearch and SRU interfaces to a Search Web Service such as outlined in my previous post. The diagram at top of this post shows query forms for OpenSearch and SRU and associated result types. The Search Web Service is taken to be exposing an SRU interface. It might be simplest to walk through each of the cases.

(Click image to enlarge graphic.) While the OASIS Search Web Services TC is currently working towards reconciling SRU and OpenSearch, I thought it would be useful to share here a simple graphic outlining how a search web service for structured search might be architected. Basically there are two views of this search web service (described in separate XML description files and discoverable through autodiscovery links added to HTML pages):

An Overview of the OAI Object Reuse and Exchange Interoperability Framework View more Microsoft Word documents from hvdsomp. This is a very slick presentation by Herbert Van de Sompel on OAI-ORE which he’s due to give today for a workshop at the INFORUM 2009 15th Conference on Prrofessional Information Resources in Prague. It’s on the long side at 167 slides but even if you just flip though or sample it selectively you’ll be bound to come away with something.
RSS Feed